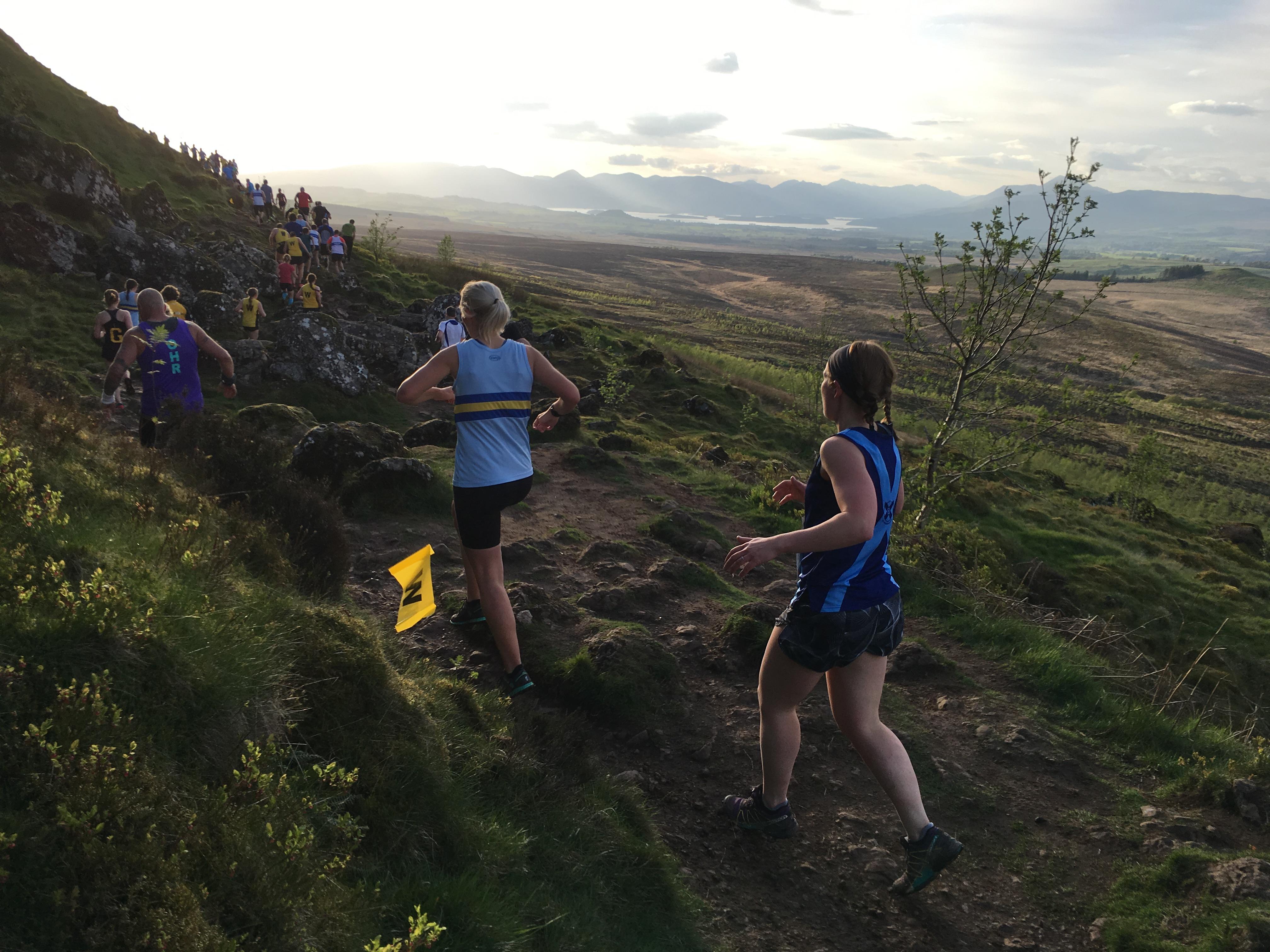 All photos by Jeremy Sutton-Hibbert.

Described as “Probably the fastest and most runnable hill race in Scotland!” six of the Bella ventured out to take part in the evening 7km run over the hills, round the rocks and through the geological curiosity known as The Whangie on the outskirts of Glasgow.

With a couple of first time hill runners (myself and Becky), and those with more experience, Iain, Kristina, Simon and Gordon, we met up, car shared, and all arrived together. Quick registration of £5, club vests on, and off up the 1.5km farm track to the start.

The sunlight was shining bright, setting the scene for a glorious evening as approximately 200 runners (going by organisers, Westerlands Cross Country Club’s Facebook post, this was a record attendance) stood around in a forest clearing. Visits to the bushes for last minute toilet and a few hardy soles ran up and down the start hill to test their legs.

We watched, and nervously giggled. The preponderance of beards and some serious looking hill running shoes, and runners, making us think perhaps this wasn't going to be our usual Pollok Park hills.

Slowly, almost imperceptibly, the crowd started moving down the hill, as organisers counted us all like sheep. Count us out, count us in. Hopefully. Then suddenly, with no warning, there was a mad dash up the race hill. The race was on. People were whizzing away.

First few hundred metres was uphill (but as one woman told Becky, “this isn’t a real hill”).Then out onto a plateau, with views of the countryside around. But no time to look at the view, all eyes were firmly planted on which rock your foot was next going to land on, which tussock of grass looked most stable and dry, and was there any opportunity to overtake coming up on the narrow paths?

The race seemed fast and furious (well to me anyway). With so much time spent watching the path and your footing, it seemed there wasn't as much opportunity to enjoy the scenery, to savour the evening.

Bumps, rocks and mud came and went, then we were through the actual Whangie itself. Entering into the mini-canyon like Indiana Jones on a holy quest for a fast time.

The canyon was cool in its depths, and we filed along, jumping the rocks one to one, one by one. Then out, and up to the top of Auchineden Hill and the trig point. The first part of the run where I had to do some strategic, tactical walking uphill. The puffing and panting of fellow runners becoming more apparent. And we weren’t half way yet.

A downhill section soon arrived, but alarmingly runners were coming back up the way! The first guys returning, shouting “coming up!”, their up being faster than our down. And a quick glance ahead showed runners, wearing a multitude of club vests, stretching into the far distance, still a way to go.

The return from half way was another ascent of Auchineden Hill, without oxygen or sherpas, by this time the legs getting heavier, a few complaints being muttered, and ahead I could see Simon, his Bella vest standing out. But to alleviate the momentary torment the view to our left over Loch Lomondside reminded us why we do these things. 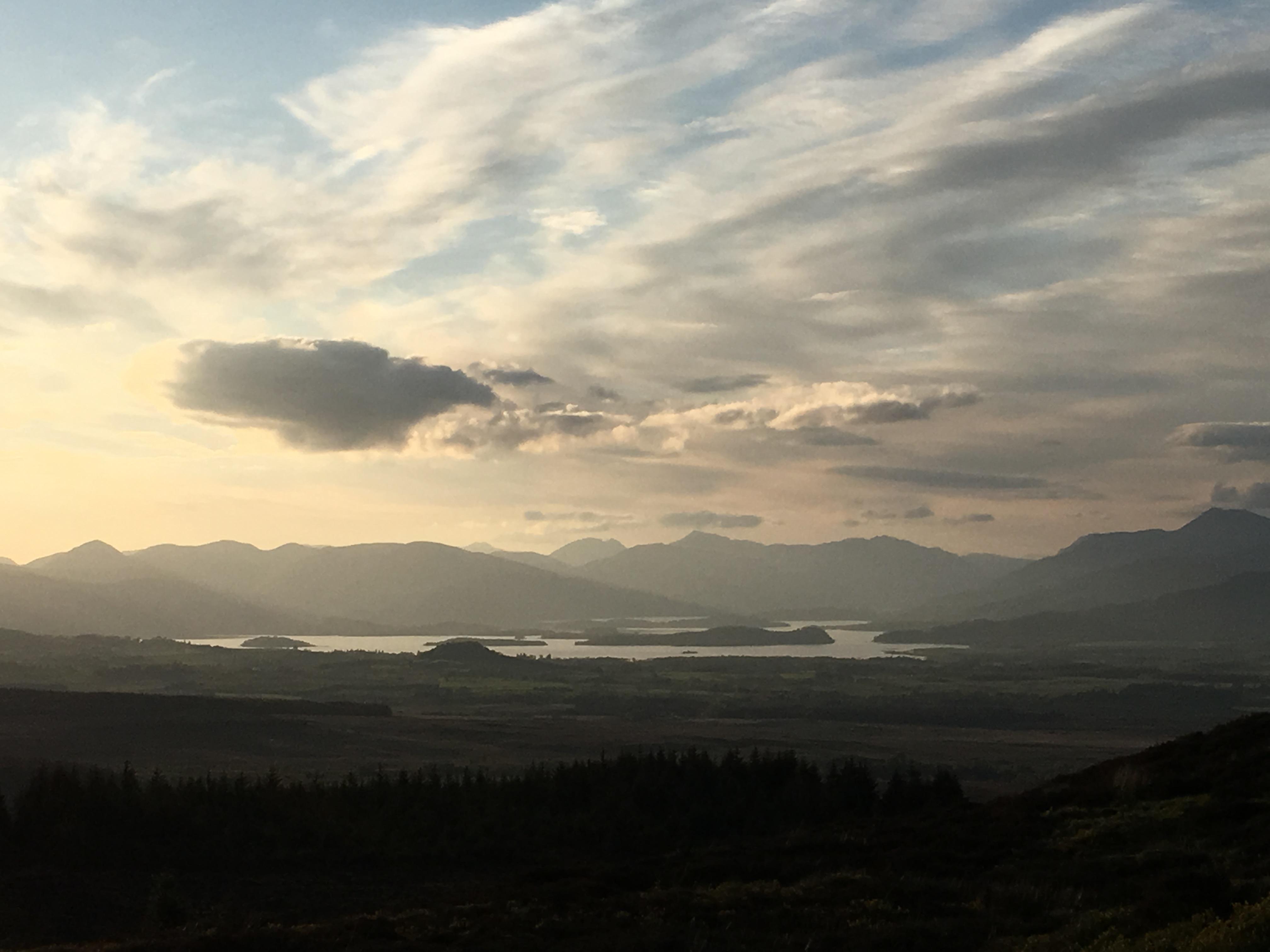 The light was sublime, and the air still, cool, and not a whisper of a breeze. The view stretched for miles, in all directions, from Ben Lomond on our left, to the Campsies on our right. A view worth the five pound entry fee. Damn, I’d willingly have paid ten for the view alone.

And then we were nearing the end, 2km or so to go, and it was more and more downhill. Pace picking up, feeling like a runner again across the flat hill tops and wider downhills. Legging it. The fast downhills being not for the feint hearted and exhilarating to run after the slow uphill battles.

Near the end I passed Iain, who had been first Bella home, and had come back up the track to encourage his team mates home.

“Go right to the end of the funnel, the finish is there!” was the shout.

Adrenaline and joy pushing me on, I careered down the final slope. 43minutes on the watch, but who cared.

All the Bella came home one by one, all having run well and strong, no casualties. We stood around, laughing, reliving the fast descents, the bogs and mud. We ate the Tunnock’s teacakes for finishers and jealously admired the runners of Westerland with their beer cans matching in colour to their vests.

As we walked to the cars Becky told us of how she felt like vomiting with the jumping and bounding from rock to rock, just as we watched another runner, on cue, vomit into the heather by the track side.

“Like running in a washing machine” was Simon’s apt description. 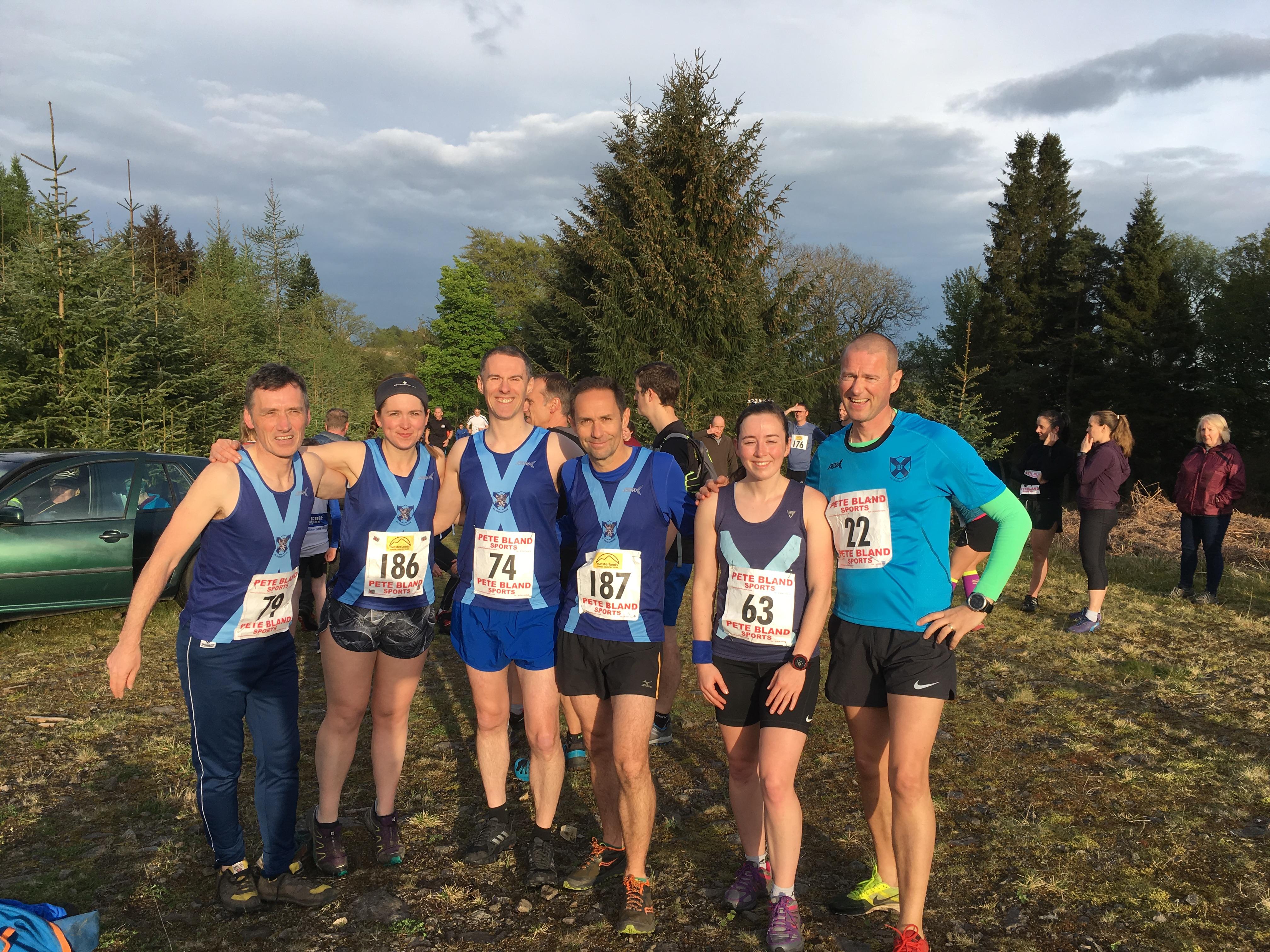