Reflections on the National XC champs

Greg Templeton looks back on the highlight of the winter season and the culmination of many weeks' training - the National Cross Country Championships in Falkirk. 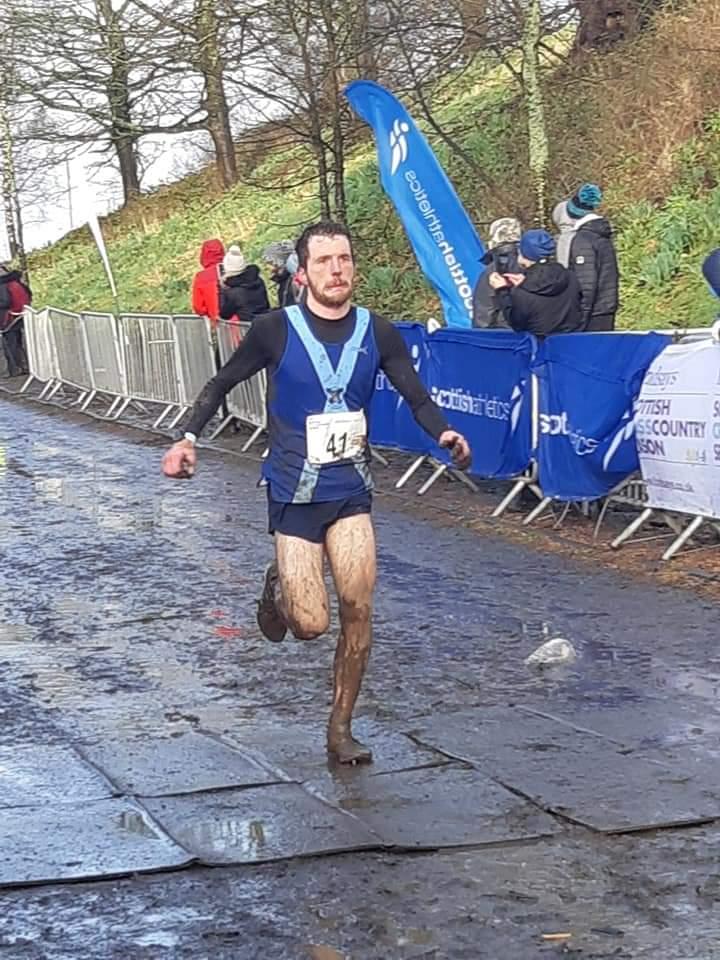 Racing at Callendar Park is an experience every club runner should face. Arriving on the edges of the park on Saturday afternoon, the skies began to clear, younger athletes walked back with their parents covered in mud, happy faces some less so.

The voice of BBC Scotland’s Bryan Burnett was commentating on the action, that being the senior women’s race which had just started. As we walked over to the park, my adrenaline starts to flow a little more readily, my heart rate starts to increase as you notice fellow athletes you compete against the forgoing season. Today is the culmination of the cross country season, battle hardened runners will do battle over a testing course. October seems like a long time ago, the weather was going to certainly do its part, with rain being the operative word in describing the last months weather.

Each club placed their tents parallel to the course, facing Callendar House, this marking each new lap. The atmosphere was incredible the amount of female athletes competing was great to see. The strength and depth of women’s cross country is exceptional, every Scottish club seemed to be competing. However our very own Bellahouston ladies were out in force doing battle. The bog, mud and challenging course with did not deter them, with their results showing their commitment to training and hard work. Our encouragements of support were given to our ladies, whom were determined and focused as they passed.

Overall the ladies finished in 12th out of 23 teams, which is the highest national standing they have ever achieved, Well done!

Warm up completed, its cold, the wind is blowing quite strongly, what kit shall I wear? The skies look clear at the moment shall I wear a baselayer? Shall I wear a hat and gloves? Spikes on, laced up tight, ONLY 5 MINUTES TILL THE START, I quickly place some tape around my spikes just to prevent them coming off. I decide to keep my baselayer on and forego the hat and gloves. Not my best decision of the day as I run over to the start. The skies have been painted in a menacing grey since the time I was in the gazebo. The weather is truly describing the challenge we are all about to face. Ten kilometers of hills, mud, quagmire and undulating terrain. Perfect.

The gun goes off with a field of 670 men making for the first right hand turn like a stampede. A strong south westerly wind blows a concoction of hail, rain or sleet. I am not quite sure as the aforementioned hat was left snugly in my bag, my head was struggling to compute the task of left foot, right foot as my brain began to freeze. The first lap was the worst running I have encountered, the weather was horrific, sheltering behind groups of runners to gain some respite from the hail seemed like the only thing to do. Having survived the first lap, I decided why not go for another two laps? Special mention must go to Stuart Miller and Darren McQuade whom were out on course giving shouts of encouragement.

I usually pick grass to run on, heading for the side to find some solid ground, not terra firma today, it was mostly bog and churned up mud, slip, ahhh, get up go! First fall of two, no broken bones. Oh well, keep going!

I really enjoyed the course, it was challenging enough to keep distracting your mind in order to plan the best route and to work through the field. As I was behind Jack Arnold, I began to hold his distance and we were working well through the field, too many people get caught up in the excitement and go off too hard so I was only happy to hoover up as many runners as I could.

When people ask you afterwards what do you think about when running, it is hard to remember and honestly with this race, all I remember is the cold. Being soaked through, not being able to think to clearly and having a good battle against other club runners. The course was excellent, having some short sharp hills to contend with all being perfectly runnable.

The last lap of the course ended with a downhill finish, which I was able to get a sprint finish out of myself. Jack and I were greeted by Gillian Glass who took our photos. The life of an athlete. I looked shell shocked apparently and I felt it.

We waited to greet our fellow club mates and friends of other clubs and our responses were the same, ‘that was the coldest I have ever felt’, ‘I was getting ready to chuck it’, ‘thank god that is over!’.

I was not the only one to feel like that.

Running is a funny thing, your mind plays tricks with you, telling you to stop. I am too cold, I can’t do this. But over time your mind starts to calm down and focuses on the task at hand. Running is a physical sport but the mental side is equally just as important and probably more so and Saturday's National Cross Country highlighted that.

Back in the gazebo, our very own Robert Carson was serving up hot drinks, making sure we were getting some calories in and getting warm. Some of the ladies were around sharing their stories of their race and now we could relate to the effort. As I sat down, changed into warm clothes and trying to get warm, we were all smiles afterwards, sharing stories and laughing about how crazy we are to run in those conditions.

I wouldn’t change it, for me cross country was my first experiences of club running as an eleven year old, I still get the same excitement from racing over the mud and hills. Cross country is timeless and doesn’t get old or boring.

The breadth and depth in Bellahouston Harriers highlights that I am not the only one who still gets excited from running in the mud and hills.