By the injured runner and her mother.

On a perfect autumn day in October, 200+ runners - representing at least 18 different clubs - gathered at the amphitheatre in Queen’s park for the annual Moira’s Run. The Bella Harriers had sixteen signed-up to run (the biggest number out of all the clubs present) and our brilliant Lisa and Robert marshalling out on the course. And what a course. If you know Queen’s park, you know it’s hilly, and while the new Queen’s parkrun has spared us the Langside Avenue beast, there was no such mercy for us with Glasgow running legend Rodger McEleney’s challenging new route.

At 10:15, Roger described the course (to a chorus of groans) and then Bea took the mic to welcome us. I remember the days following Moira’s murder in 2008, when our precious park was closed to the public as the police gathered the evidence needed to convict her killer. So, it was moving and humbling to hear Moira’s mum speak so warmly of their joy in seeing us turn up to run for Moira, in the spirit of reclaiming the park and celebrating Moira’s memory together. She also thanked the army of volunteers from Police Scotland’s Violence Reduction Unit, who make the event happen every year.

A little later than advertised, the warm-up began, with 3 trainers from Puregym Shawlands putting us through our paces. And when the team from Neeson’s Bar turned-up, filing in at the front in their inflated T.rex costumes, we all fell apart in fits of laughter! What a joyous way to start the event, although I was concerned that I might struggle to run while laughing so hard. The Proclaimers I’m Gonna Be (500 miles) was played while we strolled round to the start line (still giggling) and then we were off.

This was the first time I had run a 5k since January 1st; following multiple injury and health difficulties, so I was basically aiming to get around the course without collapsing. I had enlisted mum to be my support runner and we set off together at a somewhat ploddy pace. The views were gorgeous and the inclines made for an interesting and engaging course, sadly the swans had already vacated the pond for the winter. I found the flatter sections the most uncomfortable but managed to move up the field steadily as others took walking breaks and I resiliently kept-up my pseudo-jogging.

When we got to the base of “the beast” at the half-way point, several runners had already passed-us in the opposite direction (including Harrier Kristina Greig who claimed first lady) and as they flew down on our right, I dug my toes in for the climb. By the time we got to the top, I don’t know if you could legally describe my motion as running, but dammit I was still going, so I pushed on and managed to pick up a bit more pace down the other side. The contra-flow looped section was a lovely opportunity for us to exchange waves and encouragement and before long, it was our turn to fly down the hill on our return to the amphitheatre.

I finished three-quarters of the way down the field and mum cheered me over the line in dutiful fashion from behind me. I was delighted to have run the whole distance and to receive my medal from Bea, as did every runner before and after me. Queen’s park has so many happy memories for our family, as our back-garden when my brothers and I were babies, and as some of the earliest running routes mum took with the Glasgow Running Network back in the day. Running there is always special, but it felt extra special to be part of this event again.

Before the warm-up, mum spotted Moira’s dad Hu standing alone and told him she was amazed that he could still come up to Glasgow and do this. He responded that he and Moira’s mum love this event, as not only is it an important fundraiser for their charity (and they have helped many people touched by murder and manslaughter in the UK), but it is also one of only two places they can visit to commemorate their daughter. He added that they look around and all they see is smiling faces, and Moira would have loved that. 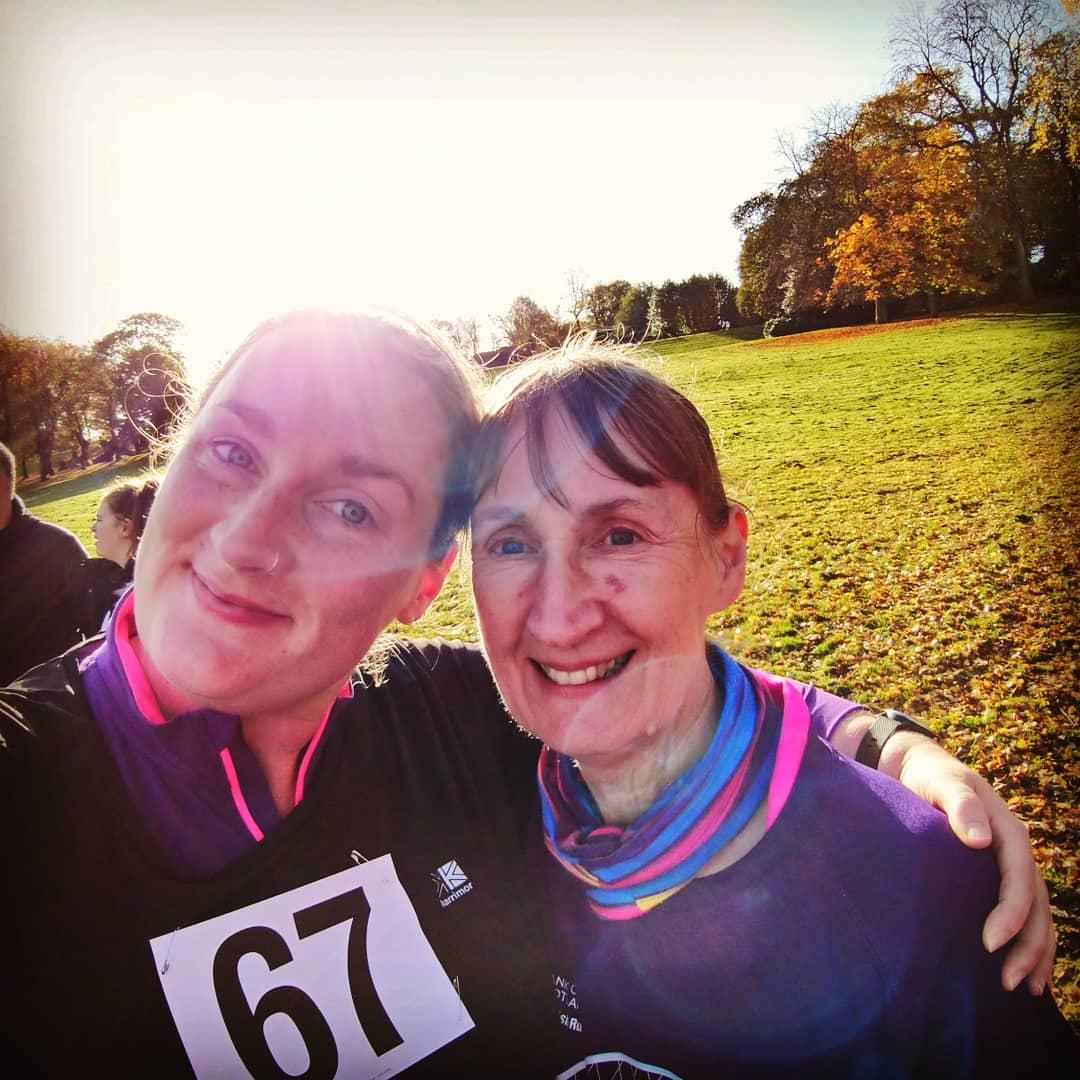