Malta storm does not deter Harrier

When a storm hit Malta over the last weekend in February, it cost one Bellahouston Harrier a shot at a half marathon PB. Written in the immediate aftermath, here Jeremy Sutton-Hibbert describes the uncertain build up to the race, his conflicting emotions on running as the storm closed in, and how he made the very most of the situation - alongside an eclectic mix of international counterparts - after the race was cancelled. 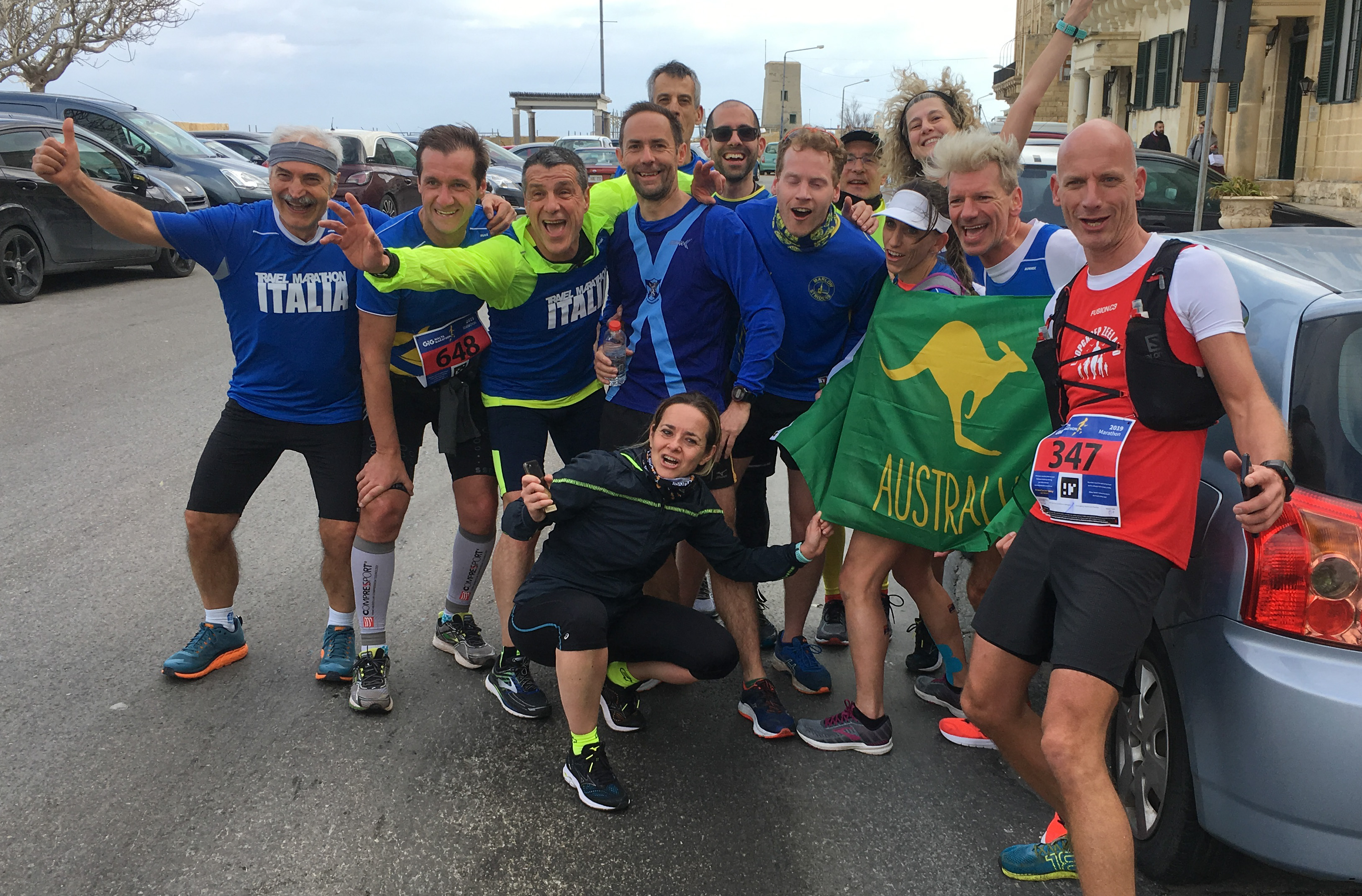 I’m sitting here with a new race t-shirt - nice and blue, beautifully soft material. And a huge medal, proudly saying ‘Malta Marathon 2019’! But the incredible thing is my legs aren’t sore, my body not feeling weary, my appetite not large. Have I reached peak fitness you wonder? No. I have the medal, the t-shirt, but no memories of the race.

I trained (as much as my limited athletic skills allow me) for the past 2-3 months to come to Malta this weekend to run the Half Marathon. From Mdina/Rabat down to Sliema on the coast, a net downhill run. It had PB written all over it. I worked hard on the training, did what were for me some high mileage weeks, focussed all on this race. But then in the past 24 hours the plans all changed. The race was cancelled 13-hours before the start.

All week in Malta it had been glorious weather, 14-degrees and sunny. Beautiful. Would have been a nice run. But all week there was also poor weather forecast for the Saturday night, Sunday morning. Not just poor, but quite worryingly bad. 70% chance of rain - no big deal, I’m from Scotland! 12 degrees - sounds ideal! The wind though was worrying, 43mph gusting to 65mph. In other words gale force 8 to 10 on the Beaufort scale that predicts trees and structural damage to buildings.

As Saturday progressed from sunny to cloudy, to light breeze, to stronger wind, the Marathon’s Facebook page declared ‘The run will take place!’, ‘You got this!’. I kept nervously checking the weather report, from a few times a day, to once every few minutes. It looked bleak. My own thinking went from, ‘no problem, I’m Scottish, I run in the rain’, to ‘well, maybe wait and see, what do you think?’, ‘I don’t have waterproofs, maybe if I buy a jacket to keep the (gale force) wind off it’ll be ok’, ‘it might blow past overnight’.

With every check of the weather my indecision on whether to run or not changed direction like a weather vane. I decided to go check out the Nike store, see what jackets were on offer. Looking for clues, for hope, for a sign. See if that helped me make up my mind. Too thin a jacket and it’d be a pointless exercise in the rain, too waterproof a jacket and maybe I’d cook on my PB attempt which was rapidly just becoming ‘do it as a run, the PB can wait.’

At the Nike store runners still mingled picking up their race accreditation, while beside them a race organiser said to little groups, “We’re ready to run! We want to run, but at 7pm, in two hours, there will be a meeting to decide if the race will be cancelled. Please check our page at 8pm. The local authorities have the final decision.”

So, someone else was going to make the decision. I was glad. There were no waterproof jackets left in the store anyway, only a Small and an XL, neither fitted, especially not for €155. For that money you want a jacket that fits right?

As I scurried through the rain back to my hotel my mind was already swaying towards not running, even if the race was going to go ahead. If they’re having a meeting it must be bad, right? Was I chicken if I pull out? Should I man up? What would my fellow club runners do or think? Was I a fairweather runner, or was I being sensible, avoiding a dangerous outing and saving myself for another day? After all, the PB attempt was going to be off the cards anyway.

For the next two hours, as runners awaited the outcome of the official’s meeting, the Facebook page lit up with comments, “I’ve flown from Australia/New York/UK”, “This is my daughter’s first fun run, it must go on!”, “Can you delay it until Monday?”, and the ever practical “Can you let me know soon as it is the difference between an early night and a few vodkas?” But mostly the runners called for “safety first, not just for runners but for all officials and volunteers”.

8pm comes and still no word of the decision, and then in a comment someone says it is already on TV, the race is off. The local authorities Facebook page also proclaims it off. So there we had it, a decision was made.

I text a few friends who had shown interest in my run, and helped me on training. “You must be gutted!”, but actually no I wasn’t. Relieved really, I’d almost had enough of thinking about the damn race by that point. A decision had been made and taken. Meanwhile outside my hotel room window the rain lashed down and the palm fronds waved horizontally.

“All overseas competitors can receive their medals tomorrow at the Nike store” - the race’s Facebook page was updated, and again lit up with comments, from pleased and satisfied customers for whom the medal seemed to be everything to those who felt they hadn’t “earned it” and thus didn’t want it. Did I want mine? I pondered it. What do I want from these races? Wasn’t it enough to have done the training, knowing I was ready? I had paid my money, flown out, turned up prepared to give it a go. Did I need to run the race? How much did I need to do exactly to be worthy of the medal? Had I earned it already, or not?

I didn’t feel I needed the medal (I was more pleased with the t-shirt I received with my Bib number), although as the Nike store was a few minutes from my hotel it’d be churlish to refuse. I’d trained, given it my all in training, so this morning instead of when I should have been running I collected my medal, gave it a cursory glance in its ziplock bag and put it in my pocket. It doesn’t mean so much, but it’ll be a souvenir in years to come. An anecdote. A little tangible souvenir of the time I felt ready for a new PB, in a race that ultimately got blown off track.

So now, back in the hotel room, the wind still blowing a gale outside, two yachts blown up on the rocks across the bay from me, waves crashing over the sea wall and flooding what would have been the finish line, I look ahead.

Some runners who have come from abroad like me have banded together on Facebook, created a group and are planning a social run half marathon (“or you can do the route twice for the full marathon!”) tomorrow morning when the weather has subsided. There’ll be flags from different nationalities, “30 countries and counting!”, “No runner will be left behind”, “It’s a social run for a memory, not a race”, “wear your t-shirts and bib numbers, bring your medals, we’ll do a photo!”.

I’m thinking to go, run a half marathon a day late, on a different course and not aiming for a PB. But I’ll wear my club vest, after all it’s why I’m here, to create memories. I’m here to run.