In Lockdown With Bella #8

In Lockdown With Bella is a series of blogs from members of Bellahouston Harriers aimed at providing an insight into running life during the coronavirus pandemic.

In this blog, Iain Morrison explains how he completed the Goatfell race in Arran without getting on a boat, and Stuart Macdonald shares his experiences from a 24 hour running challenge.

Back in early March, over a couple of pints with some Harriers I was persuaded to enter the Goatfell Race – the plan was for us to take part and have a day out on Arran. That obviously couldn’t happen this year and it is unlikely we well be able to compete on the hills and mountains any time soon.

Goatfell is a mountain that means a lot to me, it’s the one I’ve been up by far the most. My first climb was with my parents as a five year old, I took my own kids up when they were very young, I used it for an undergraduate project and I raced it once, as a nineteen year old in 1984. Even though then I was fit, and ran in the Pentlands, I wasn’t prepared for real mountain racing, the toughness of the continual climb and the recklessness of descents. 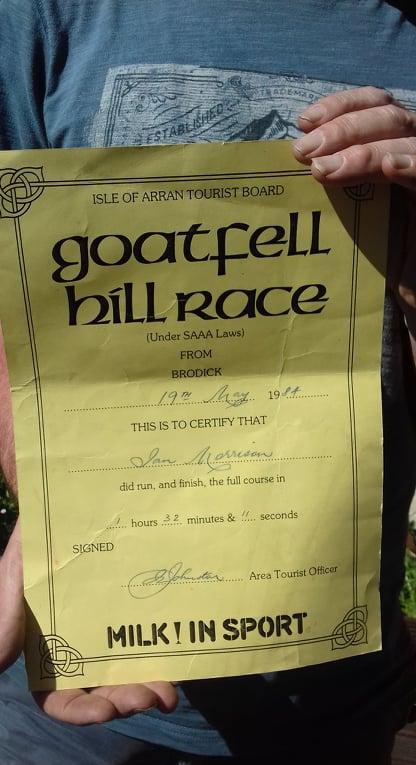 Whilst I have been running hill races again for the last few years, these have been short races, Goatfell would have been a real challenge, not to be taken lightly.

Throughout lockdown I have been running exclusively within Queen’s Park with my son Craig, making the use of its variety. One of the main features of the park is the Grand Avenue, part of the Paxton design, with twin rows of trees from the Victoria Road gates, culminating in a flight of 32 granite steps to a long, level terrace. Many runners are familiar with the steps as they were part of the famous Southside 6 route. Although I never run Rocky style, up them, I often do reps up the adjacent grassed embankment.

Anyone who takes stairs in public buildings will have seen signs that equate daily walking up them to climbing a Munro. An idle thought came into my mind – I wondered how many repeats would equate to running Goatfell, and, so, if couldn’t get there, perhaps I could race the equivalent.

The calculation for measuring the elevation was straightforward – using a tape measure I was able to check the risers of the steps, the slope of the central landing and the small slope above and below the steps. With Goatfell being 2867 feet (874m) that equated to 172 times the height of the terrace. (I actually ran three extra ones just to make sure).

The gradient of the slope was just about 1:2. In running terms that is extreme - most modern training advice suggests maximum grades of 1:10. It does however equate to the steepest slopes of the race route. Whilst hill runners generally walk up that grade, my plan was to run the entire way, without a break, jogging down each repeat.

With decision made, at 8am on a Saturday I jogged to the foot of the terrace with Craig did a few warm-up exercises then toed the line for the start. 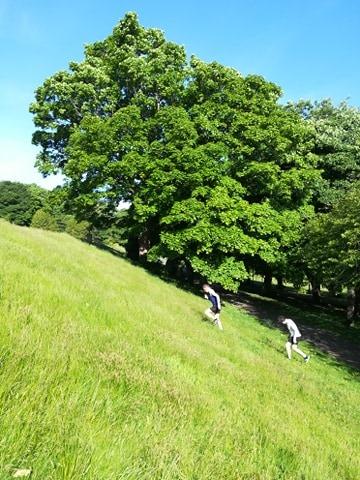 One thing about these grades is that it is not possible to ease your way up. Rather you must tackle each repeat with controlled aggression, 172 mini adrenaline fuelled surges with 171 short downhill recoveries.

Wearing the Bellahouston vest was important, as this run needed to be treated with the all-out commitment of a hard race to achieve. I was also wearing ultra-lightweight “barefoot” shoes – these made ascents easier and improved balance for descents. 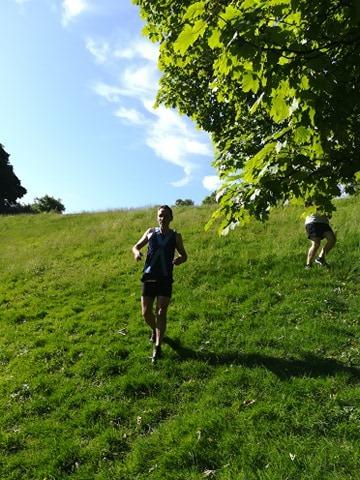 Rather than run up the exact same spot I made my way back and forth along the length of the terrace, running a few metres between each climb, adding further variance by sometimes cutting up or down the slope on the diagonal. This also meant I could retain social distancing.

The embankment had its own little differences too – it is higher to the east and lower to the west, in some areas the grass was long, tough, and full of buttercups. At the eastern end, the reinstated slope (after the Scottish Water works) lacks the sharpness of Victorian engineering is steeper in part and has thin vegetative cover.

With the sun beating down, the mature trees by the steps offered some welcome shade each time I passed. This was also where I had my family support – Craig joined me for these climbs, and my wife, Karen, cheered us on, took photos and towards the end handed us water.

To keep going I would sometimes try and visualise where I would have been on the real mountain, always keeping a careful tally of my progress – at the deer fence, the long plateau, the cairn where the tourist path meets the Corrie path, the start of the scree slope. It was difficult to understand what was going on physiologically. The first twenty climbs or so felt quite tough, but soon I managed to get into a rhythm, spurred on by each little milestone. Oddly, though the legs burned at the top of each climb, it didn’t feel as if they were getting cumulatively sorer. Nonetheless I certainly was getting weary after about 120 repeats right until the completion came into sight. 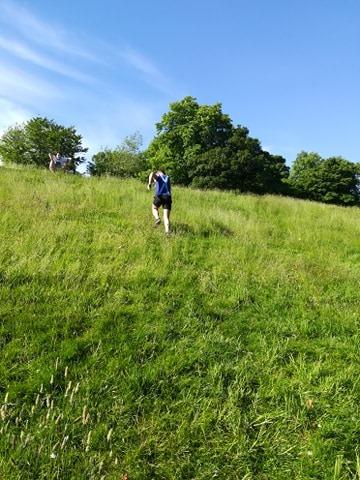 The last few climbs were by the steps with Craig joining me. Those were hard, and at the end I was as exhausted as any race and, lay on the ground to recover. I didn’t properly time the run, but it took slightly less than an hour and a quarter (less miles than the real race).

It was good to be back wearing the club vest and gaining the sense of accomplishment you feel after a tough race. We made our way home, with me wobbly legged and completely knackered, for coffee and breakfast.

Being in my company for some time you would have thought Jeremy would have considered a few old sayings:

Anyway, throwing caution to the wind Jeremy shared a challenge the “P24 longest day” and a short film of someone doing a similar run.

No sooner had he mentioned the challenge than I was signed up and scheming for the Harriers own virtual version in July, fortunately for ALL, between Colin and Jeremy it was decided that it was not suitable as a club event. I signed up 8 days before the event, but how do you prepare for running on the hour every hour for 24 hours?

I was encouraged that Jeremy and Becky had also signed up and even more so by the weather forecast where Glasgow was going to get far better weather than the south of the UK.

My Wednesday trial run had shown me how little time was available between kicking shoes off after a run and heading out for the next one! Further preparation stretched to buying snacks and sports drinks and route planning to have 1.1 mile route that would mean I’d cover the marathon distance through my 24 hours.

Almost immediately I was reminded it was a run not a race! But in my mind it was the only way I would ever get close to 3.30 for the marathon distance, so it was 24 one mile time trials for me! Miles at 0800, 0900 & 1000 all came and went with gentle progressions in my times.

I even managed a quick commute to Shawlands for the 1100 and a run with Jeremy. That lasted for about 5 seconds till I left him for dust. A prime example of the tortoise and the hare , Jeremy was saving himself for the later hours.

I couldn’t let the day pass without a trip to the Harriers training grounds. I decided on a route round Bellahouston from behind the ski slope, towards the elephant, left to the hockey pitches, past the sports centre up to Mosspark Boulevard a few hundred yards there and back into the park finishing just before the incline got too steep. Route selection and my bubble mate as a pacer meant that it was my fastest mile of the day. 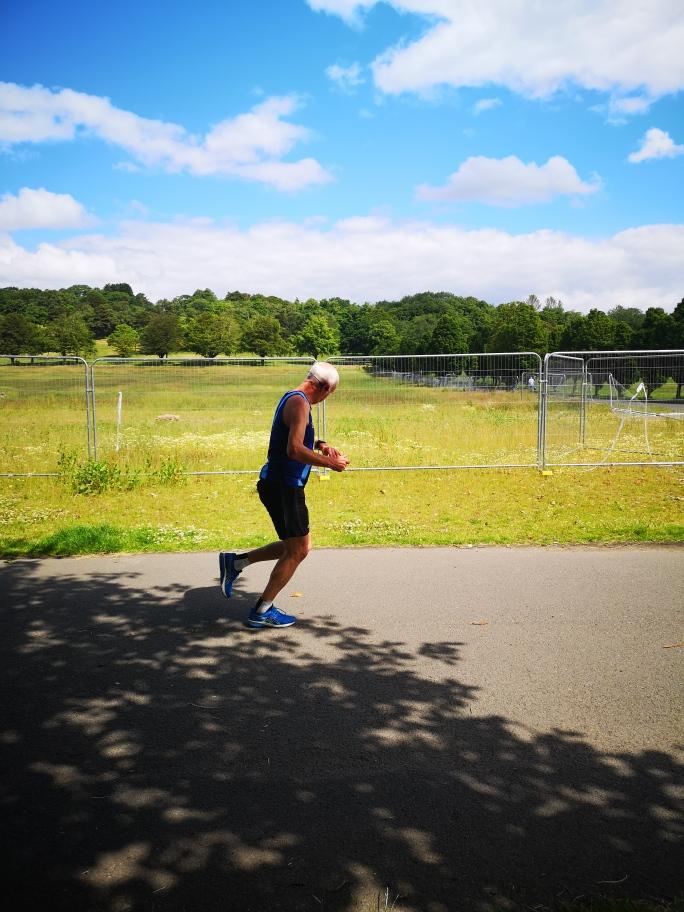 Even allowing for a distant chat with an old school mate I was still able to get home in good time for the 1300 run. By now I was realising that food through the day would be a challenge, grazing required rather than any large meals.

The afternoon was an easy and fun shift doing the runs with Becky and Jeremy. The organisers had tried to mix the event up with themed miles, but I was just contrary:

1900 Sprint Mile, my SR, slowest mile until 0500 when all the starting and stopping really took its toll;

0700 Breakfast mile, I was so set on this, mega cook up, washed down with lashings of IPA;

Not to be confused with naughty entrants miles like the 0200 naked mile from one of the virtual race entrants!! THAT JUST WOULDN’T HAVE BEEN APPROPRIATE FOR COMMITTEE MEMBER OF BELLAHOUSTON HARRIERS!!

Having only signed up for the P24 eight days before its start I was a rookie but approaching the challenge with enthusiasm. For me it was the only time I would do an event with the marathon distance in a time approaching 3.30, so whilst my pals were looking at the long game, I was pushing myself every hour for my 1.12 mile and truly F..., bushed after each one.

I realised about hour 15 or 16 that the starting and stopping was a very different challenge on my legs. 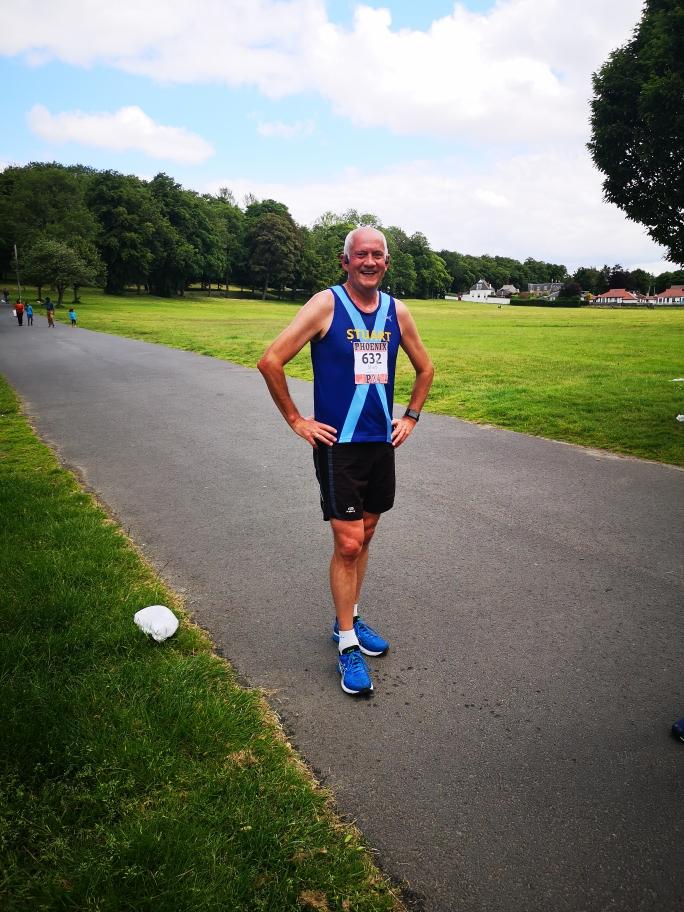 It took til mile 19 for the weather to break, my time between runs was now focused on finding dry socks, or drying lightly used 1s with a hairdryer, yes Susan I do have such a thing!! With hindsight I should have been more prepared and had special deliveries from MiGo Sports, socks and glide. Nothing worse than chaffing from vests in the rain!!

My original plans for nutrition was graze, pasta bowls then big breakfast and gallon(s) of IPA. I managed to graze and have pasta over several hours rather than two. Big breakfast was sacrificed to reheated pasta followed by shower and sleep.

Having run three marathons this was a far different challenge, I could manage stairs but my head was gone, I couldn’t risk naps through the night so I was 26 hours without sleep, that impacts in different ways.

My time, at the end it was incidental 3.33 or so. Main thing was I had survived, no injuries and had enjoyed 14 or 15 hours.

My last mile was broken up with my Dad and Elaine popping up with a finishing arch, unfortunately for them I was now doing minimum distance so they had to shift, probably quicker then I could, to the actual finish line. 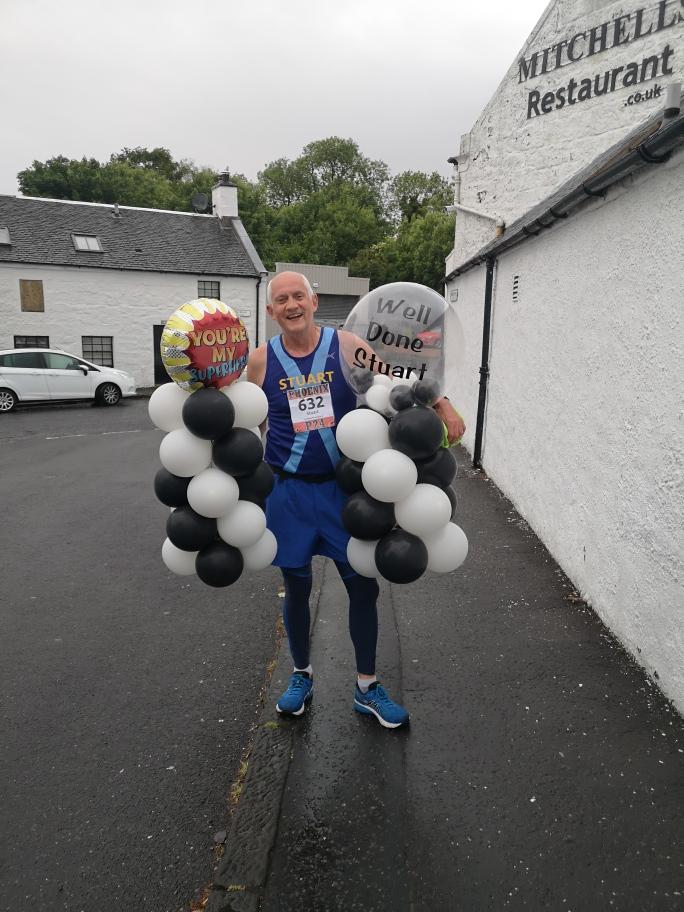 I was chuffed that Becky and Jeremy also completed, each doing it in a slightly different way.

Finally, thanks to everyone who sponsored me. I was welling up at the start of first mile when folks woke up and thought let’s sponsor Stuart, all the “you’ve just been sponsored” notifications came through, when I was waiting for the clock to tick over to 0880 to let the fun begin.

This was very low key compared to my London marathon of last year but there is another £700 heading to Bowel Cancer UK so thank you one and all.

PS the Aussie chap in the film is a GOD, all I managed in the 24 hours was getting to the start line 24 times in clothes that were DRYish...