In Lockdown With Bella #4

In Lockdown With Bella is a new series of blogs from members of Bellahouston Harriers aimed at providing an insight into running life during the coronavirus pandemic.

In the latest blog in the series, Iain Morrison describes how a 'looser approach' to training is helping inspire a younger generation, Angela Campbell explains how a virtual training camp has helped make up for a missed trip to Portugal, and John Cunningham provides his review of running movie Skid Row Marathon.

You can pack a lot into a short run – particularly when you have an asset like Queen’s Park close to home. It’s my usual running haunt, and, since the current crisis, the only place I go.

I’ve been getting out early in the morning, when the park is quiet, normally with my middle son. He is just an occasional runner and had lost a bit of fitness since being away at uni, which he is now keen to regain. The park is particularly beautiful this time of year and it makes an ideal and inspiring training ground. 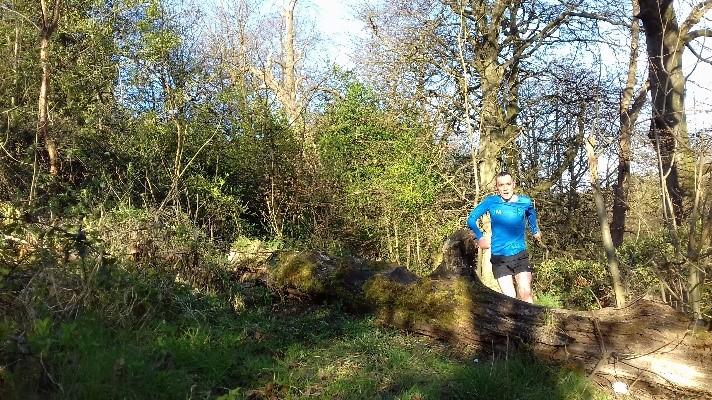 I’ve always been a fan of runners / coaches, from the past, who have taken a more natural and looser approach to running and training, such as the originator of fartlek – Gosta Holmer, Doris Brown-Heritage, Percy Cerutty and Bruce Tulloh. Taking some of their ideas as inspiration, and with a pinch of parkour (for my son, at least), each time in the park we move at varying speeds.

Our time outside involves playing with running - using the landscape to build up strength, co-ordination, flexibility, and form. It is never a prescribed schedule or session rather just going with the flow. However, the focus has been on controlled power and strength - combining extremely short sharp bursts up the steepest hills, little surges, running drills like bounding and introducing a lot of jumping – hurdling / vaulting over falling logs and informal plyometrics. It’s always fun and never the same twice. 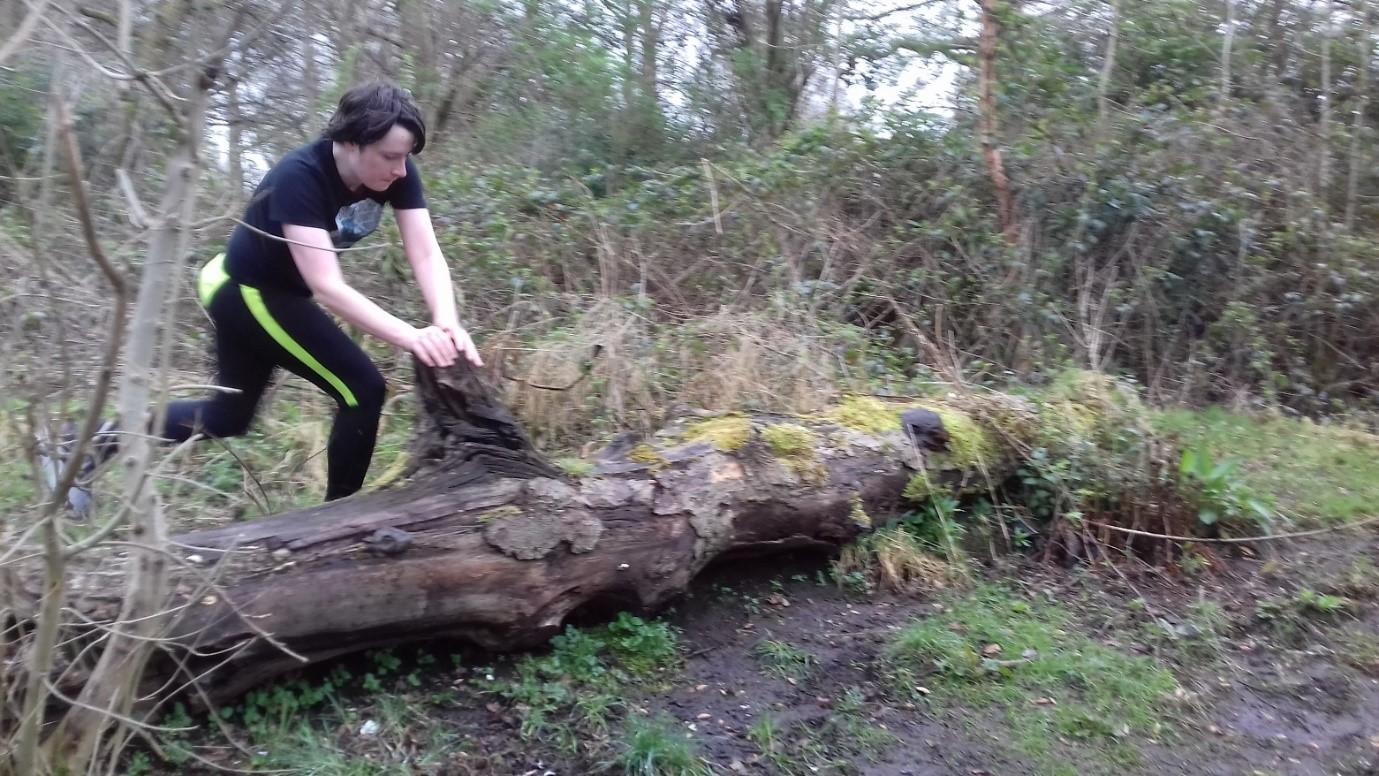 Social distancing has further added to the randomness of our sessions – changing routes and directions to stay a safe distance away from other park users.

Without the distraction of racing it becomes a good time to really work on these often-neglected aspects of running whether you are a novice or, like myself, a more, err, seasoned runner. What better way to do that then through a quick blast through the park? 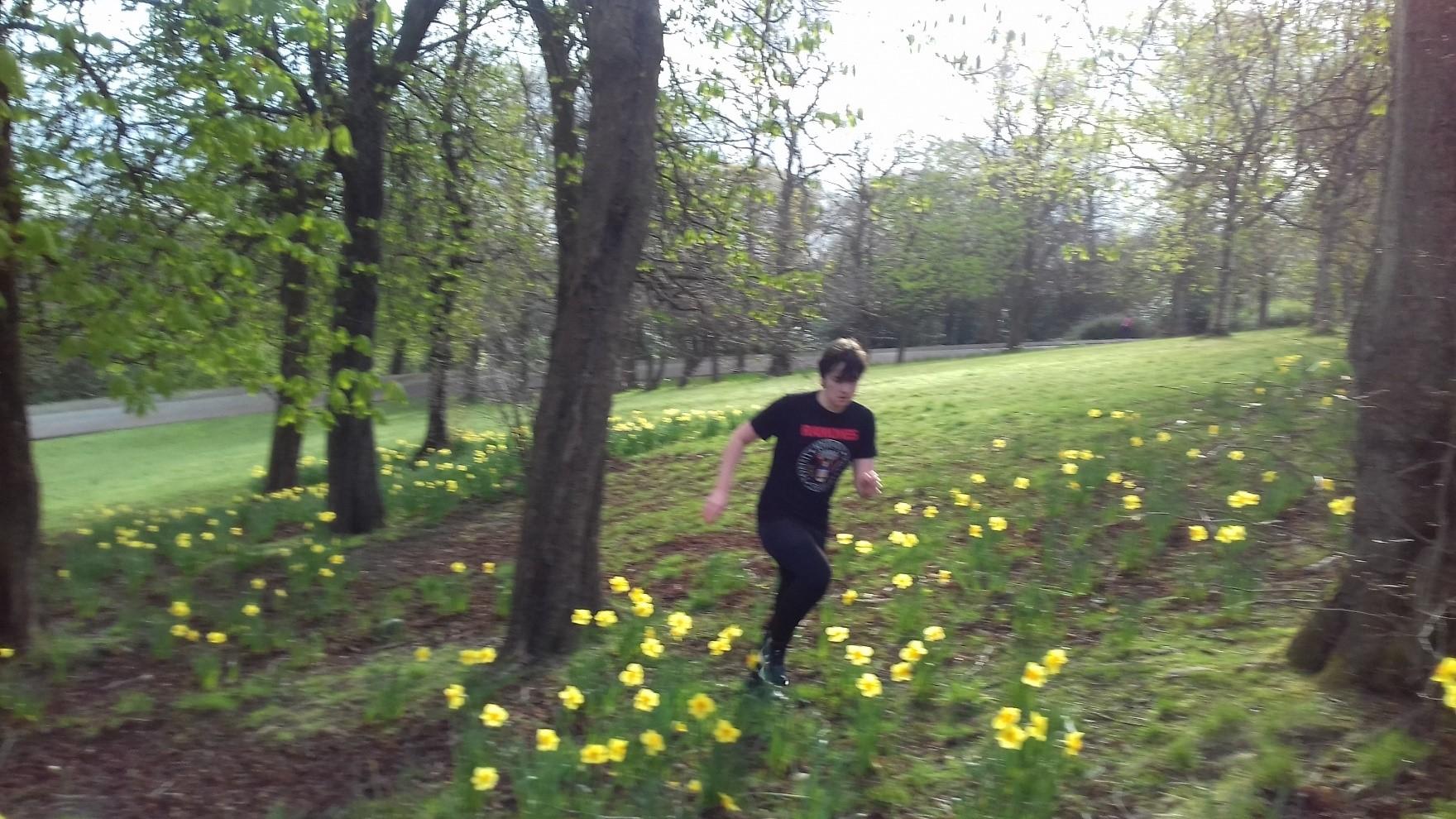 Back in 2012, when I was still a Bella newbie, I came across a company called Embrace Sports offering out of season running holidays in the Algarve region of Portugal.

It seemed a slightly strange concept, but potentially good for someone like me who can’t sit still and turns tomato red if I’m in the sun too long. I consulted my running guru (aka Harriers legend Jimmy McMillan) who agreed it was worth a try and the rest is history.

The owners have become good friends and along the way I talked some other Harriers into coming along – our VP Katherine Hylands being my most successful recruit closely followed by Susan Hasson. I also convinced a certain fellow Embracer (*Editor's note: Dangerous Dave Eames) to move to Glasgow from Malta and join the best running club around.

The weather in Portugal can be a bit mixed at the start of the year but it’s guaranteed to be better than Glasgow. There’s always a motley crew of like-minded people of all ages and backgrounds (much like the Harriers), and it’s great to have the opportunity to run in a variety of locations including woodland trails, coastal paths and the rock hard Lagos track (no spikes required), all fuelled by delicious food and some local wine or beer every night.

January 2020 should have been my ninth Embrace holiday in the Algarve. Unfortunately a strange bout of ‘pneumonia’ meant Dave and I weren’t able to join the rest of Team Scotland, and due to current events it has not been possible to reschedule our booking yet. However, at the start of April a post appeared on the Embrace Facebook page about a ‘Virtual Camp’ which seemed an excellent way to brighten up the lockdown days and complement the Harriers training schedule……

A few of us immediately signed up, and there was even some advantages to staying at home:

However, instead of coach Neil explaining the next day’s session over a glass of wine, we received instructions via Facebook. We had to take care of our own nutrition (and hydration), come up with locations for our own sessions and fit them in around work. There was also the added challenge of keeping to the social distancing guidelines which meant it wasn’t possible to meet up to do the sessions together.

However, just like on a holiday, it was emphasised that the sessions were all optional with a particular reminder about recovery and listening to our body with regard to each session. This was particularly important since we were still working and wouldn’t get the normal recovery time.

Some of the sessions during the week included:

We all know the importance of strength and conditioning for runners and coach Rachel provided some excellent videos for us to enjoy at home too. We were also provided with recipes for some of our favourite holiday dishes including falafel, and spinach and artichoke lasagne to give us enough energy for all the sessions.

It obviously wasn’t quite the same as a week in Portugal, but seeing updates and pictures of other people’s sessions was a great boost. As Katherine commented in her feedback, the structure and motivation over the week was really helpful. We’re crossing our fingers that the lockdown will be over soon, and we’ll be able to get back to Bella summer sessions in the parks and hopefully Portugal later in the year too.

Over the last few months, we have all seen our choices and activities restricted as our favourite bars, restaurants, shops and cinemas have closed to help with the effort to defeat the coronavirus pandemic. Many have seen great uncertainty about the future of their jobs and businesses, while others working in essential services have endured unprecedented workloads.

As runners, we are fortunate that our pastime and passion remains an option, albeit in a more restricted manner than we would like, with races cancelled and training reduced to a solitary pursuit. It has also given me time for reflection, and to appreciate the things most of us do have more than the things we are currently denied.

In his day job, Mitchell sees an unending procession of criminals pass through his court for sentencing, but it is only when one of them, whom Mitchell had previously sent to prison, contacted him after his release and asked to meet the judge at the Midnight Mission homeless shelter where he was living.

Mitchell, a keen runner, was so moved by the experience that he immediately started a running club to help those on Skid Row find a focus to help with their recovery from addiction and mental health issues.

At this point, the lives and histories of Mitchell and his club members come into focus. Mitchell’s wife speaks of a tough but compassionate man who once contemplated becoming a priest (‘he has the heart of a priest’, according to his wife). The runners themselves have a myriad of moving stories of troubled backgrounds and the path to redemption.

Ben, for example, who dreams of recovery and earning a coveted place on a course at the San Francisco Music Conservatory. Or Rafael, on parole after years in prison for committing a gang-related murder, and Rebecca, a single mother recovering from years of alcohol and drug abuse who dreams of a better future for her and her young son.

It is an incredible experience to watch these people bare their souls and allow us to join them on their journey towards recovery, and how important a part the running club plays in that journey. Not all of them make it, and emotions run very high at times.

Judge Mitchell is a thoroughly inspirational character. We learn about his life, his career and his family, and how he has held on to running despite a horrific injury which threatened his mobility. It is incredible to watch his humble approach to his fellow runners, and the phenomenal fundraising efforts which allow the viewer to watch the club members take on marathons in locations as varied as Ghana and Rome.

I’ve watched a number of running documentaries and I can’t recommend this one highly enough.

You can watch a trailer for the documentary here: https://www.youtube.com/watch?v=lq4o8P_seMc