There were nine Bellahouston Harriers running in the London marathon 2019. Here, three of our members share their experiences of the event. 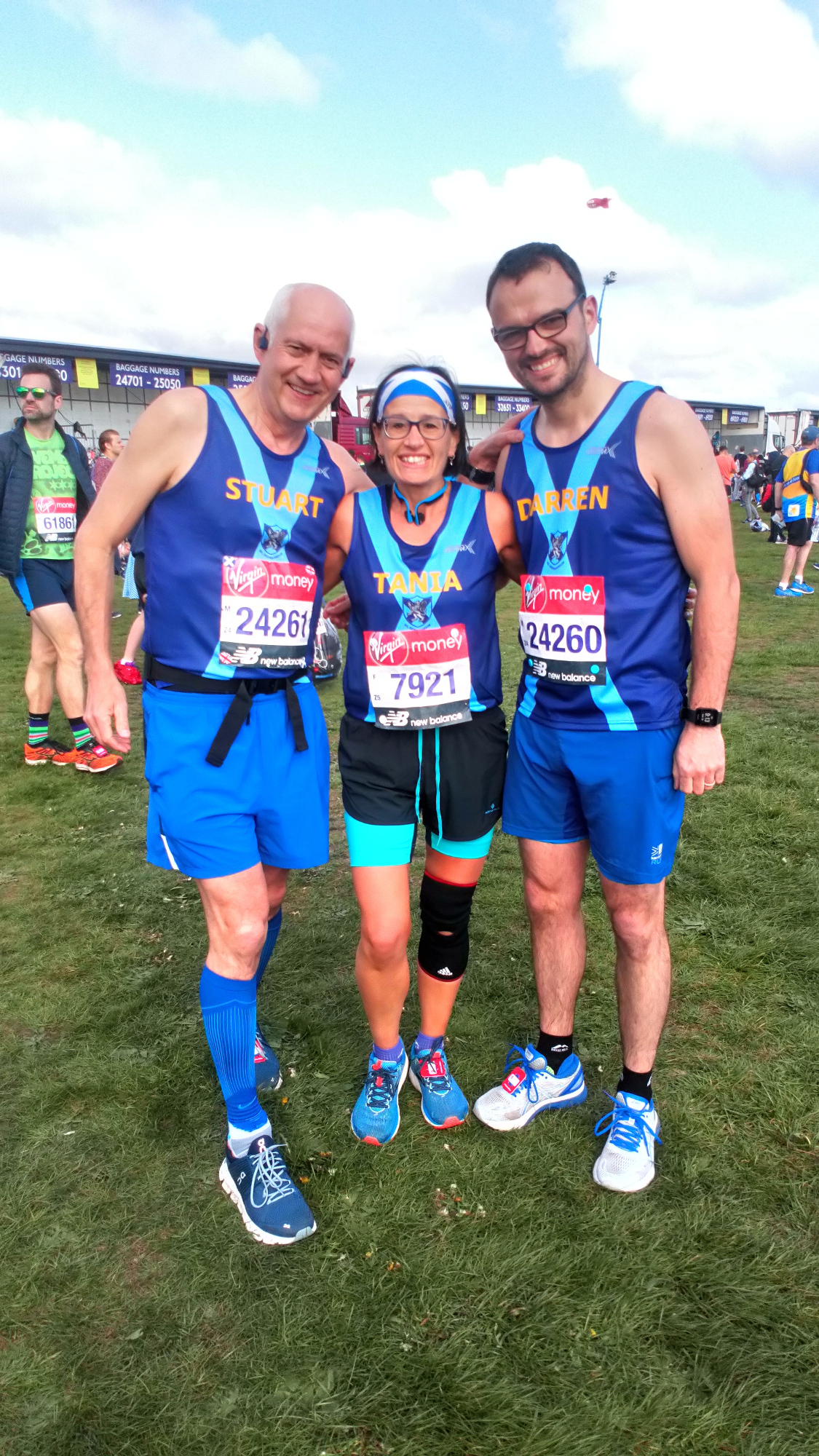 The 39th London Marathon started shortly after 10am from three starts in Greenwich Park. The nine runners from the club were spread across the starts in the knowledge that we would get tremendous support from family and club mates throughout the day across the course. It is reported that corks on supporters' refreshments had been popped before the first Harrier had even started...

A hint, if heading to Blackheath, for a future London Marathon, get on the train at Waterloo East (or Cannon Street for Maze Hill and the Green start) rather than London Bridge, trains were packed before getting to London Bridge where platforms were four-deep with runners waiting to cram on, and this was at 7.30 in the morning!

Unfinished business from 2018 - having failed to make the start line that year - saw me determined to give it a good go this time.

I’m told by those who saw me that I looked “focused”. Of course I did - I’m an accountant - and go through times tables and count up and down from one hundred all the way around. It’s amazing how hard “seven nines” are at mile 22.

So much for Marianne’s saltire - see later - but our Bella vest has been mistaken by Sassenachs more than once for the national vest. There really was a call from the sidelines of “let the runner from Scotland through”. A huge thank you to all who have trained with and supported me, “sprint” finish and job done, phew!

Marianne was running as a North Highland Harrier, where a 'good for age' place was earned, but affiliated to Bella, and really wanted to finish with the Saltire! 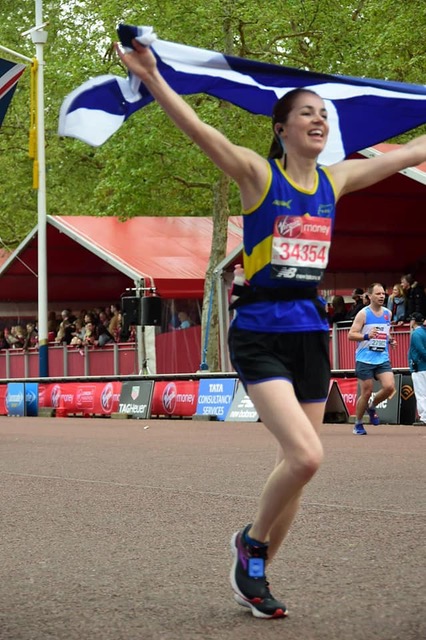 Assembling in red start zone 1, it was exciting to congregate by the gates I’d seen everyone file through when watching VLM on the telly.

Eager to get into the starting pen, I might have been a wee bit further forward than ideal and set off slightly faster than intended - 5min kms were out the window, it was 4:45s, oops! It felt relaxed and easy, though, so I just thought 'stay relaxed and see how it goes'.

I had no name on my vest so I was delighted to hear someone shout my name, and then I caught a glimpse of Jasmine’s fabulous artwork and turned to give a wave. Massive thanks to the Bella supporters even thought I was in the “wrong” vest 😉 – it really made me smile!!

I might have been running on my own this year and without my kilt attracting some good shout-outs, but I had plenty of company from spiderman and indeed the bananas in pyjamas much of the way round who were having a lot of fun out there. I passed the guy dressed as big ben and offered some encouragement. Alas I didn’t get to help him cross over/under the line later!!

I was feeling good over Tower Bridge where last year I was already melting in the heat. I took a moment to appreciate that. It was amazing timing as I came through the half-way section as the elite men were on their way back towards the final few miles. Eliud Kipchoge in full flight! Wow. The guy’s a legend. A shout out to Mo, Callum and Wilson Kipsang. Then my focus turned back to my own race.

A high-5 and encouraging words from my friends at 14 miles where they’d promised to be, then I put music on to help me through the next section before I’d see them again at mile 21. I was plodding a bit by then (more like 5:30+/km now) but still ticking along and could see a PB was easily on the cards as long as I kept moving forward. No need to stress, just relax, smile as much as possible and guzzle loads more electrolyte drinks to try and prevent the dreaded cramp from setting in.

Round the corner at the palace, flag out, bring it home! PB in the bag and faster than my “gold” goal I had in my head. I’m sure the last few weeks of training with the Bella sub-22s had a part to play in that, so thank you guys!

I travelled to the Blue start with Darren and Tania. We were all assembled in zone four and we started just after 10.30. The course was packed even with just the blue start runners. Running together would have needed too much weaving, so I made the most of the downhill 3rd mile and took my leave from club mates.

I’ve bounced round the course as a supporter many times but the noise on the road was unlike anything I’d heard before. I missed the horses before Cutty Sark but did spot the Cutty Sark and supporters at several spots around Surrey Quays and again at Rotherhide.

I had a decent pace and rhythm but was starting to slow after mile 18 when Tania and Darren went past me. It was great to run together through Canary Wharf past my old office on the North Colonnade for about a mile but I could not hold Tania’s pace and saw them disappear swiftly into the distance.

I was now 30 seconds a mile slower than target pace so the support from Run Dem Crew at mile 21 (what a noise!!), Elaine and Jasmine at mile 22, and Emma at mile 23, together with the time I had banked through to mile 15 was invaluable. All the time now I was doing the calculations of pace I needed for sub-4.

I caught Susan (who had been in the red start) on embankment about mile 25. I'm not sure if that’s what distracted me but I was suddenly aware of the blue start 4-hour pacer, just in front of me. Whether it was the pacer or the finish line, my last 0.4 of a mile was the quickest average pace of all!!

I beat my target by 49 seconds, crossed the line with my head up and bagged a 12 minute PB.

Thanks to Harriers training and all the long Sunday runs mainly with Susan, Tania and Darren.

It was also fantastic to have raised £1,500 for Bowel Cancer UK - a cause very dear to my heart.